Beyond Meat Continues to Climb with European Expansion 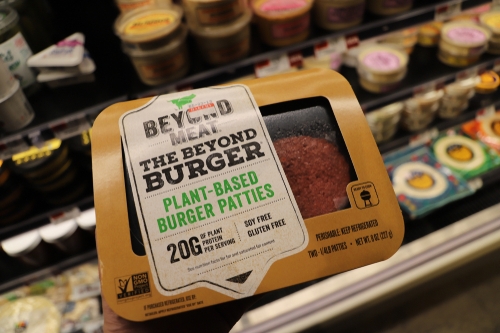 Beyond Meat, Inc. (NASDAQ: BYND), experienced an immediate rise in its shares after entering into a partnership with Zanderbergen World’s Finest Meat to produce the widely-trending plant-based meats in Zoeterwoude, the Netherlands.

As their new alliance with Zanderbergen was announced, Beyond Meat’s shares have grown 7.18% to USD 86.11. Since their market debut on the 2nd of May, Beyond Meat’s shares have grown 85%. A J.P. Morgan analyst, Ken Goldman, estimates that fueled by the younger, health-conscious consumer base, the market for plant-based meats could be worth USD 100 Billion in 15 years with Beyond Meat taking a 5% share. Goldman also predicts that Beyond Meat’s annual sales could exceed USD 5 Billion in the near future, compared to its annual sales of USD 88 Million last year.

Founded in 2009, Beyond Meat’s frozen plant-based products are supplied at more than 30,000 global retail outlets, but produced only in the U.S. These international retail outlets are based in countries, such as Australia, Chile, the European Union, Hong Kong, Ireland, Israel, the Middle East, New Zealand, South Korea, Taiwan, and the United Kingdom. The plan to expand the Company’s production into Europe will be its first production capability outside of the U.S. By doing so, it “is expected to reduce the brand’s transportation footprint, while increasing the speed in which Beyond Meat can get products to customers across Europe,” the Company stated.

With Impossible Food’s patty recently being introduced in Burger King’s Whopper sandwich, Beyond Meat looks to get a step ahead of its main competitor. McDonald’s introduced a vegan burger in Germany, and looks ahead to rival Burger King’s Impossible Whopper with its own plant-based alternative. Therefore, a partnership between Beyond Meat and McDonald’s is likely, according to Jeffries Analysts. One Wall Street Firm estimates more than a 30% jump in Beyond Meat’s share if the partnership happens.