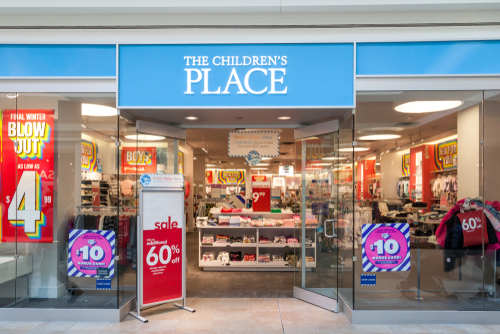 The Children’s Place (NASDAQ: PLCE) reported its third quarter financial results before the opening bell on Wednesday. The Company’s shares plummeted by 20.2% after reporting a weaker-than-expected fourth quarter guidance.

For the third quarter, The Children’s Place reported earnings of USD 3.03 per share on revenue of USD 524.8 Million. The Company narrowly surpassed Zacks Consensus Estimates of USD 3.02 per share and also beat revenue by 1.76%.

Total sales during the quarter increased marginally by 0.4%, primarily driven by a comparable retail sales increase of 0.8%. While revenue rose during the quarter, net income slipped from USD 43.0 Million compared to USD 49.9 Million the same quarter a year ago.

At the end of the quarter, The Children’s Place opened six stores and closed 12 stores. The Company was operating 955 stores and square footage of 4.5 million, representing a decrease of 3.2% compared to the prior year.

The Company said warmer weather impacted sales in the third quarter. On the other hand, The Children’s Place is expecting “meaningfully weaker” than planned mall traffic to significantly impact its holiday sales.

Jane Elfers, President and Chief Executive Officer announced, “Driven by a strong back-to-school season, we delivered a positive 0.8% comp in Q3 on top of a positive 9.5% comp in Q3 a year ago and EPS near the upper-end of our guided range, despite multiple headwinds, including prolonged warmer weather into late October, which negatively impacted sales of colder weather product in key regions across the country.”

As for the fourth quarter, The Children’s Place is expecting diluted earnings in the range of USD 1.48 to USD 1.68 per share on revenue between USD 504 Million to USD 509 Million. Additionally, the Company is expecting a mid-single digit decrease in comparable sales. Analysts are anticipating revenue of USD 555 Million and earnings of USD 2.06 per share.

And as for the full-year, The Company is expecting diluted earnings in between USD 5.00 to USD 5.20 per share on revenue in the range of USD 1.862 Billion to USD 1.867 Billion. The Company is also forecasting comparable retail sales to decrease by 3%.